Tonight basketball fans finally receive the matchup they have been calling for since the Cavaliers historic comeback last June, the rubber match between the last two NBA Champions. “The Trilogy” marks the first time in NBA history that two teams have met in three consecutive NBA Finals. The Golden State Warriors became the first team in NBA history to start the postseason with a 12-0 record after a sweep of the San Antonio Spurs in the Western Conference Finals. Meanwhile, the Cleveland Cavaliers jumped out to a 2-0 lead over the Boston Celtics in the Eastern Conference Finals after two blowout wins. The defending champs would face some adversity as they blew a 21 point lead in Game 3 to drop their first contest of the postseason. After a slow start in Game 4, Kyrie Irving and LeBron James carried the Cavs to the Finals for the third straight year by taking Games 4 and 5. In Game 5, LeBron James passed Michael Jordan to become the NBA’s all-time playoff scoring leader and he also passed Manu Ginobli for third all-time in three pointers made in the playoffs. LeBron stated last summer that he would spend the rest of his career chasing the ghost of Michael Jordan and with the numbers he has posted so far this postseason it is clear that he is ready to lead his team towards another title. The King is having his most dominant postseason to date with averages of 32.5 points, 8 rebounds and 7 assists per game. With the addition of Kevin Durant, this year’s Warriors team proves to be the toughest opponent LeBron has faced in The Finals. However, with the emergence of Kyrie Irving and Kevin Love playing arguably the best basketball of his career, the Cavaliers can make this an epic conclusion to a legendary trilogy.

The matchup to watch for in this series is between the two star forwards, Kevin Durant and LeBron James. Kevin Durant sent shockwaves throughout the NBA  last July when he announced he would be joining the Golden State Warriors. Despite missing 19 games with a knee injury, Durant has fit nicely with the Warriors this season and he has turned them into a historically dangerous team. KD has had a stellar postseason as he is shooting 55.6 percent overall and 41.7 percent from three point territory. Last year the Cavaliers focussed defensively on Steph Curry, thus forcing the struggling Harrison Barnes to beat them. The Cavs won’t have that luxury this time especially since Durant has already had some success against them. In the two regular season meetings between these juggernauts, Durant averaged 28.5 points per game on 51.3 percent shooting. Tyronn Lue will have LeBron start off with guarding KD, but it would be asking too much of the King to use all of his defensive energy on the Warriors forward. I expect the Cavs to give Durant a variety of looks that include Kevin Love and Richard Jefferson. LeBron is 18-5 against Durant, including a 4-1 victory over KD’s Thunder in the 2012 NBA Finals. This year’s Finals could finally see Durant best LeBron with the help of Golden State’s other three All-Stars. Both superstars have almost identical numbers when they face off against each other which should result in a classic Finals clash.

LeBron James is the only player to rank in the top ten in points (first), rebounds (seventh), and assists (third) in NBA playoff history.

The Warriors (12-0) and Cavaliers (12-1) enter the NBA Finals with the fewest combined losses of any two teams since the current playoff format began in 1984. 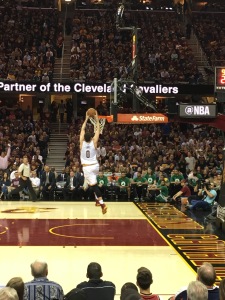 Kevin Love soars for a dunk on a fast break during Game 4 of the Eastern Conference Finals May 23. Photo Credit-Jeff Lansky

Never before have two teams met in three consecutive NBA Finals and this series promises to be the heavyweight bout that fans have been dreaming of. The key for the Cavaliers in this series is to get back on defense especially on the fast break. The Warriors lead the league this postseason in fast-break points with 20.7 per game. The Cavs have improved defensively on the fast-break so far these playoffs, giving up 10.2 points per game which ranks fifth in the league. Golden State’s bread and butter is to make you pay on the fast break so is it is crucial that Cleveland plays defense. The way this strategy could swing in the Cavs favor lies with two men: Tristan Thompson and Kevin Love. Both Love and Thompson rank in the top ten for total rebounds this season with K-Love sitting third for defensive rebounds with 9 per game. TT is third for offensive rebounds with 4.2 per game. The rebounding from Cleveland’s big men will be vital in giving the Cavs second chances on offense and the potential to stops runs on defense during transitions. In addition to his rebounding skill, Kevin Love plays another crucial role in this series for the Cavs with his scoring. Last year, K-Love was seen as a weakness at times against the Warriors and his struggles showed. However this season, he has returned to the type of player he was in Minnesota. He caught fire in the Eastern Conference Finals averaging 22.6 points, 12.4 rebounds, and was a mind boggling 23 of 43 from beyond the arc. The Cavaliers do well when they can get Love going early and they will need to feed off of him during this series. You know what you will get from LeBron and Kyrie Irving, but if the Kevin Love from the Conference Finals shows up the Cavaliers will take this series. I believe the conclusion to this epic trilogy is going to be a hard-nosed, back and forth fight. Don’t expect any sweeps or 3-1 leads this time around as this is championship basketball at its finest. By sweeping through the West the Warriors have yet to face any true adversity and I think that will work in the Cavs favor.
Cavaliers in six.