LeBron James brings the ball up the floor against the Indiana Pacers on February 15. Photo Credit-Jeff Lansky

After a drama filled season the Cleveland Cavaliers are ready to defend their NBA Championship in the playoffs. The Cavs are set to face their Central Division rival, the Indiana Pacers in the first round. Critics have been all over the defending champs as they went 10-14 after March 1. The criticism grew louder as the Cavs squandered a one game lead for the number one seed to the Boston Celtics in the Eastern Conference this past week to finish as the number two seed. Despite their struggles over the past few months, the Cavs have maintained their confidence level and a desire for the playoffs to begin.

“We have a good chance to win it all. But it starts with baby steps first and we understand that.” LeBron James

LeBron James expressed his confidence in his teams chances to repeat as NBA Champions to the media after the team’s first playoff practice on Thursday. And if you needed any more evidence of The King’s lack of concern about the Cavs recent struggles look no further than his Instagram account. Cleveland had the second worst defensive rating in the NBA since the All-Star break. The Cavs defensive effort was head scratching at times and couldn’t be summed up better than when they blew a 26 point lead in the fourth quarter to the Atlanta Hawks last Sunday. LeBron’s playoff performances need no explaining as the history speaks for itself. The real question is can the Cavs flip the switch during the playoffs? The answer to me is yes as they have shown the past two years they can do it. This season is no different as the Cavs field arguably their deepest roster in franchise history. Cleveland has the perfect opportunity to make a statement against Paul George and the Pacers in the first round.

The matchup to watch for in this series is a no brainer: LeBron James and Paul George. These two superstar small forwards have had classic playoff battles in the past during LeBron’s tenure with the Miami Heat. We got a preview of this matchup on April 2 as the Cavs outlasted the Pacers 135-130 in double overtime. James and George put on a show with The King tallying 41 points, 16 rebounds, and 11 assists while PG13 had 43 points, nine boards, and nine dishes. This series should give us more epic highlights between James and George. And who knows maybe we will see another “kodak moment” between King James and Pacers guard, Lance Stephenson. 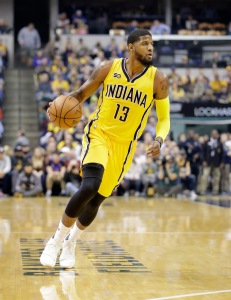 INDIANAPOLIS, IN – APRIL 04: Paul George #13 of the Indiana Pacers dribbles the ball against the Toronto Raptors at Bankers Life Fieldhouse on April 4, 2017 in Indianapolis, Indiana. (Photo by Andy Lyons/Getty Images)

The last few months the Cavaliers having been itching for the playoffs to begin and now they will get their wish. The Indiana Pacers may have clinched a playoff berth on the final day of the regular season, but they are no slouch. When the question of slowing down the Pacers arises the obvious answer would be to stop Paul George. It’s not that simple as the Cavaliers will have to target Indiana’s backcourt to have success in the first round. The Pacers have multiple weapons at the guard position including Jeff Teague, Monta Ellis, CJ Miles, and Lance Stephenson. Teague suffered an ankle injury in Wednesday’s season finale, but he is expected to be ready for Game 1 on Saturday. Ellis and Miles are both dangerous scorers that can get hot from beyond the arc at any moment. Stephenson is an excellent wing defender and as noted earlier he is a LeBron agitator.

The Cavs have proved all season long that they have no problem getting their offense going. The Pacers struggle at defending the three-point line, which is where Cleveland can hurt you the most. Kyle Korver punished the Pacers in two games this season by shooting 82.4% from three-point land. However, the key for the Cavs in this series and the entire playoffs is defensive effort. The defending champs have shown that they can play lockdown defense when it matters the most and they will have to prove it again against Indiana’s sharpshooting backcourt. The Cavaliers will win this series in 5 games.